our most recent  Blog Articles

Postmodern Pastels Are In Vogue 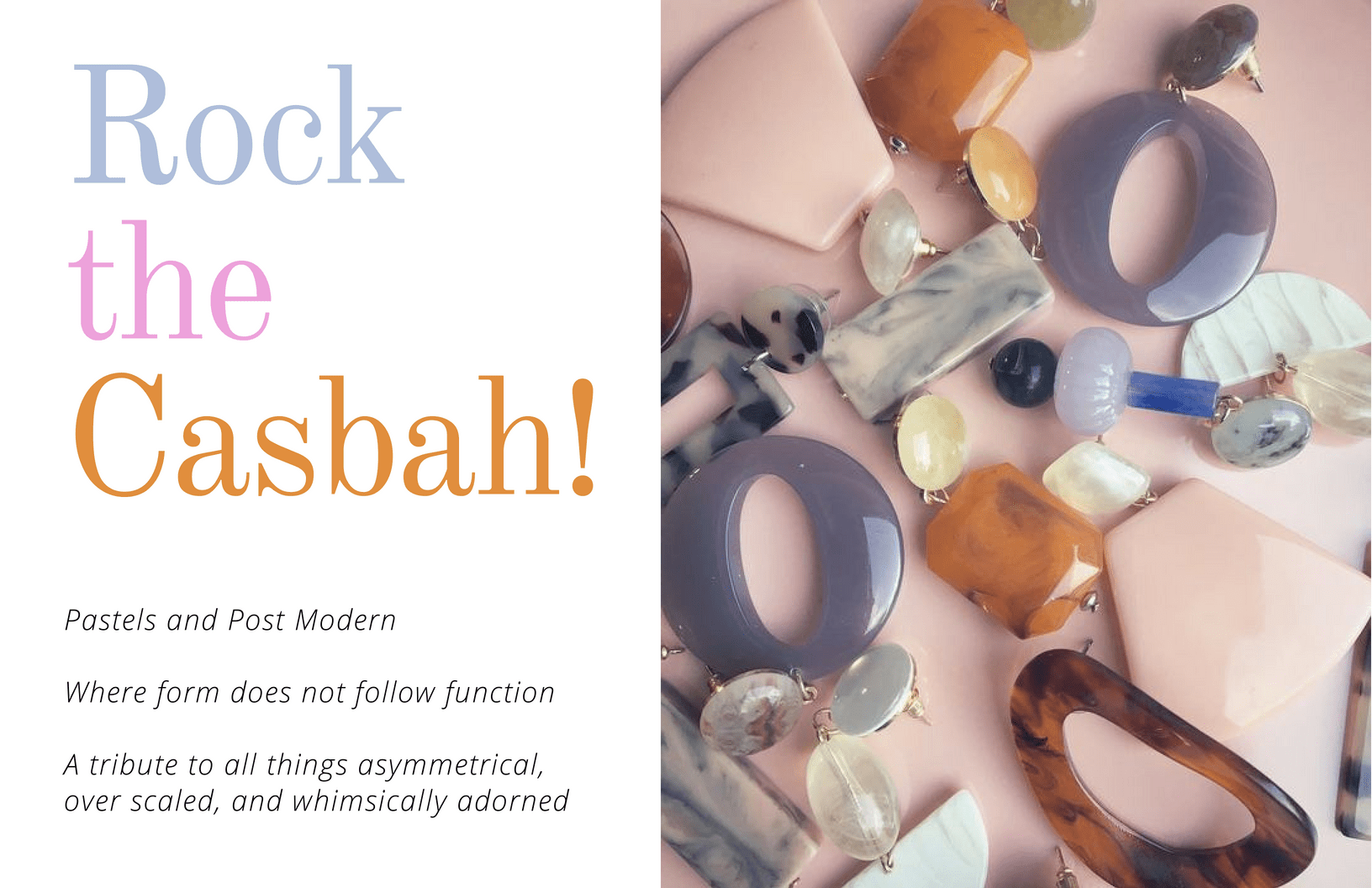 History repeats itself, they say, and it’s true. Here in the Pacific Northwest, architectural housing styles conventionally deemed “historic” are mere reflections, for the most part, of ideas delivered here when it was settled. Since we at Miller Interior Design understand these styles and their origins, we find ourselves serving up interesting interiors in response. We delight in crafting design schemes that pair a client’s treasures with references to their favorite design eras. But the term “historic preservation” can often lead to connotations of a very limited array of architecturally significant historic styles.

Lately, though, we’re seeing a review of styles that we have to admit we thought we’d never see again. And what’s upon us now is quite The Clash against the rigors of established modern styles that dominate our region. We just have to say, what a blast!

Check this out: current trends have been exploring and revitalizing the – brace yourselves – Post Modern Era, which emerged first back in the early 1980’s. What?! Some of you might cry, “NOOO!!!! Not mall bangs and mullets again! Surely we’re not going to don giant ruffles or parachute pants, and certainly, the housing and furnishings that designers toyed with in those days could never see a come-back!”. Well, friends, as the 1980’s starred in cinema sequels (not to mention how the current political climate has awakened – um – MUCH reaction), the Empire is indeed striking back…like a rock opera late-night sing-along!

With so much unrest around us, we’re seeing some really intriguing responses to it. On the more calming end – what we sense will dominate style shifts particularly in our region – pastel palettes are everywhere we look, from design magazines to couture runways. Conversely, we’ve also seen an abundance of geometric patterns and wildly playful, almost Memphis style resort fashion and furnishings (which reminds us of the trend predictions we made in Autumn of 2016). Love it or hate it, Post Modern Design in its obnoxious flair is in full effect in global design trends, and as connoisseurs of the diverse expanse that style can offer, we’re not ashamed to admit – we love it! The Casbah is rocked once again in the following vignettes we’re tossing in the mosh-pit of all things asymmetrical, over-scaled, and wildly adorned. 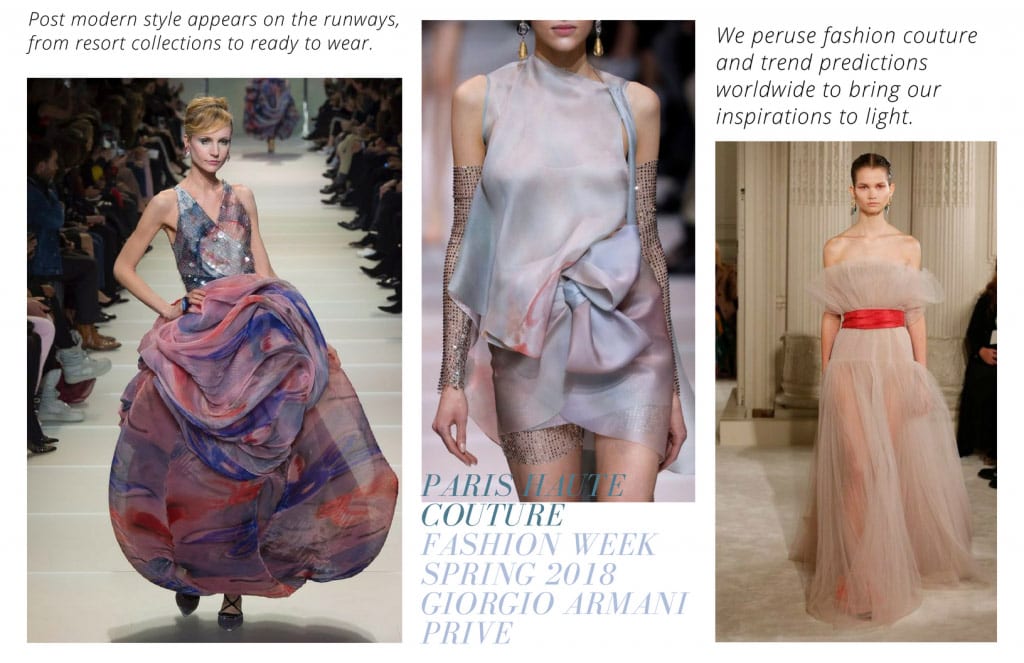 For context, the Modern era (to which is now more often referred as “Mid-Century Modern”, and also informs most of Seattle’s current established housing trends), sick to death of the over-ornamentation of classical architecture, honored a strictly simplified code of form, function and honesty in materials. After decades in the mid-1900’s, though, of stamping out yet another glass box, schools of architects started reacting against that new normal. Finally, creative souls bludgeoned by 1970’s Brutalism – that drab concrete mass of oppressive structuring every communist country espoused – set up a volcano effect for what would erupt stylistically in the 1980’s. With shocking resonance, The Post Modern Era – as in, “Dude, I’m so sure. We are, like, so totally over The Modern Movement.” – burst out its deput, as utterly juxtaposed from its predecessor as it’s predecessor’s … predecessor (say that 10 times fast). The style is characterized by a flagrantly bold and varied mix of shapes and textures that were irreverent and unclassical. In fact, they took classical references and blew them up for play, because anything associated with a known establishment was being questioned, tossed out altogether, or better yet, hysterically mocked. Designs were busy, to say the least (“outrageous” comes to mind), in stark contrast to the clean, sleek modern architecture that came before. In this avant-garde design period, the form did not follow function, and to tell the truth, form and function were flipping the bird at each other and anyone else. Empty frames hanging on a wall, oversized nonfunctioning fireplace chimneys, exaggerated sized light fixtures – all played a part in the raucous romp. 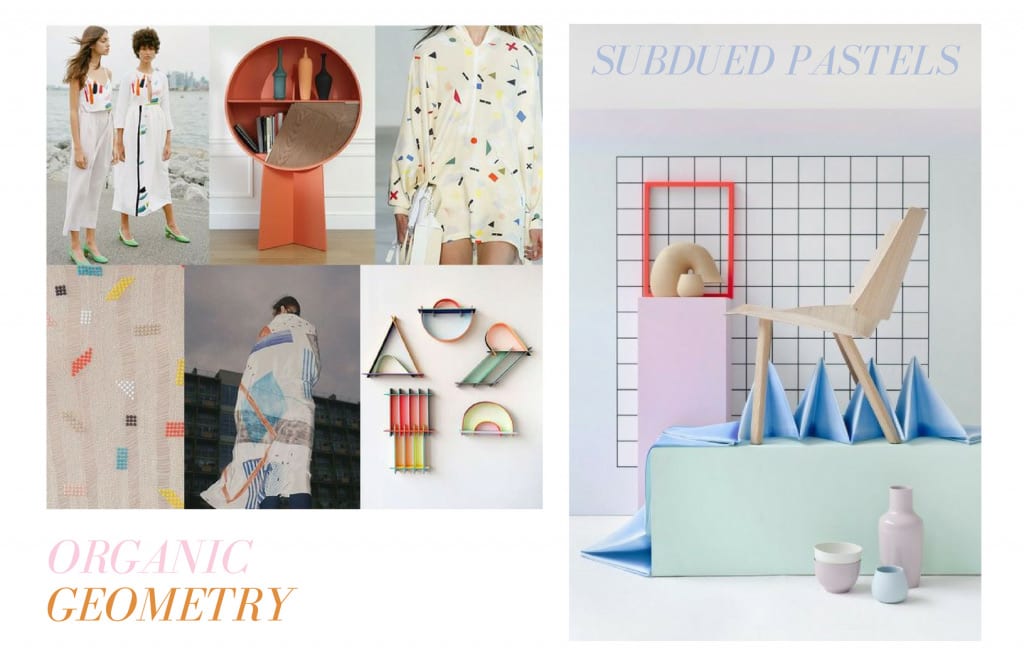 After years of clean, even barren modernism, the playful geometric layers and patterns were a refreshing shock to the palette. Akin to walking around a colorful, bustling new city after being in a stark and style-less airplane for hours on end.

Postmodern Pastels in Your Home

Some of our favorite interpretations, however, mix just one or two elements that are decidedly from the postmodern interior design era into a lively modern design scheme. Coming home to your own unique haven can be just as refreshing as that escape to an energetic city. So often, our clients tell us, “I don’t feel the same pull to book vacations anymore because I love spending time at my own home now.” We’re not saying you’ll lose your love of travel, but you’ll bring home that confident feeling of being your full self, deeply fulfilled. Surrounded by your favorite collections, and greeted by a soft yet striking palette, you feel revitalized.

Bold touches like this wall pattern (a nod to Art Deco, a complex and refined style that preceded the modern era), the Memphis sofa, or the striking art make this room tasteful and unique. When we design your Pacific Northwest retreat, we love to tailor your surroundings to match your personal palette with finesse and cohesion. 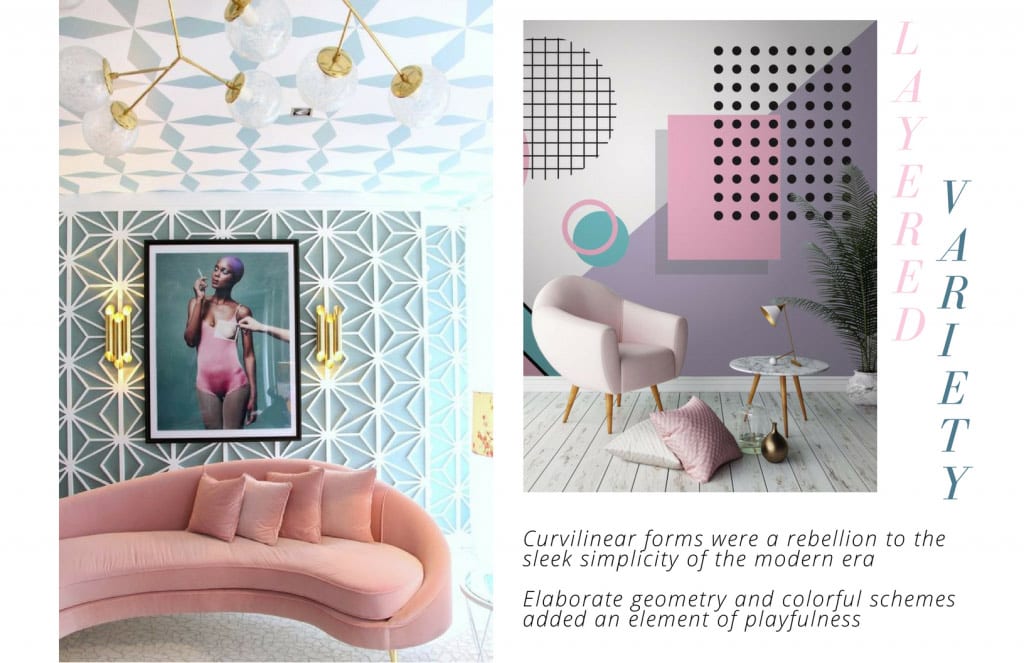 The most unique items in your collection will light up a room when displayed with care and poise. These asymmetrical designs with striking oversized pieces are pulled together by the principles of design: balance, rhythm, harmony, emphasis, and proportion. From the scale of the furniture to the patterns on the wallpaper, the design is purposeful.

Vivienne Westwood was a design icon famous for her avant-garde take on British styles and her rebellious punk modern designs. Her wallpapers are a perfect example of how the rhythm of proportion and scale complete a design. 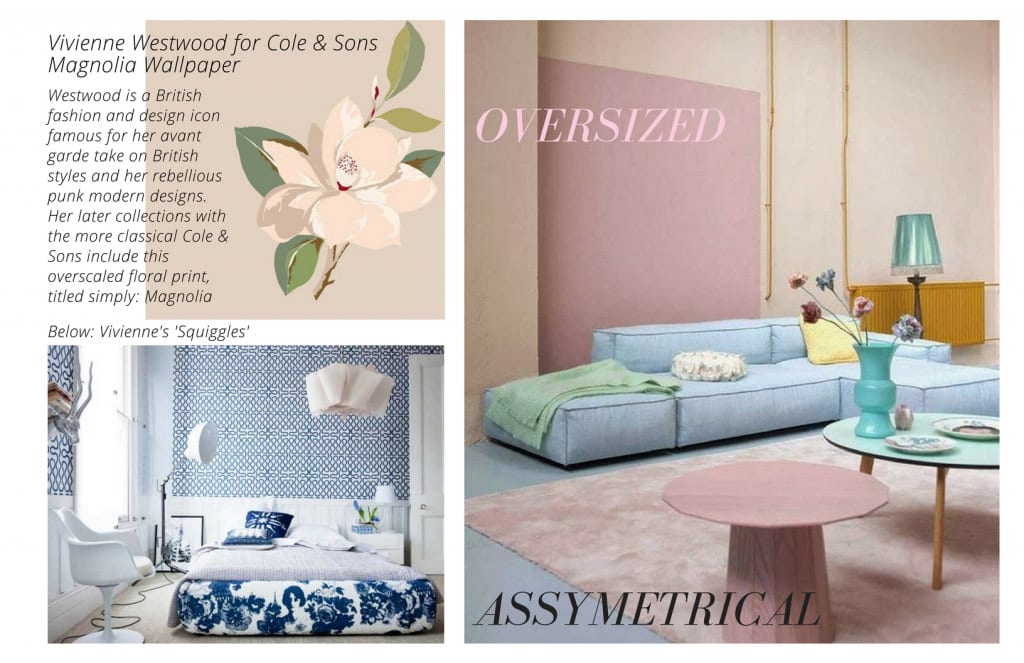 The whole attitude of the style, be it an exploration of subtle curiosities or a full-on punk rock rave of a design, shouts out a call to lighten up and acknowledge that there ought to be more playful things in life. The colorful palette and whimsical details of the Post Modern era are energizing and refreshing. We love this floor pattern and the wild bookshelf in the Ligne Roset vignette.

“Wouldn’t it be nice, to live in a world where conformity was a prisonable offence? Where convention had been replaced by chaos with a smile”

We love to see brilliantly unorthodox details in good design. 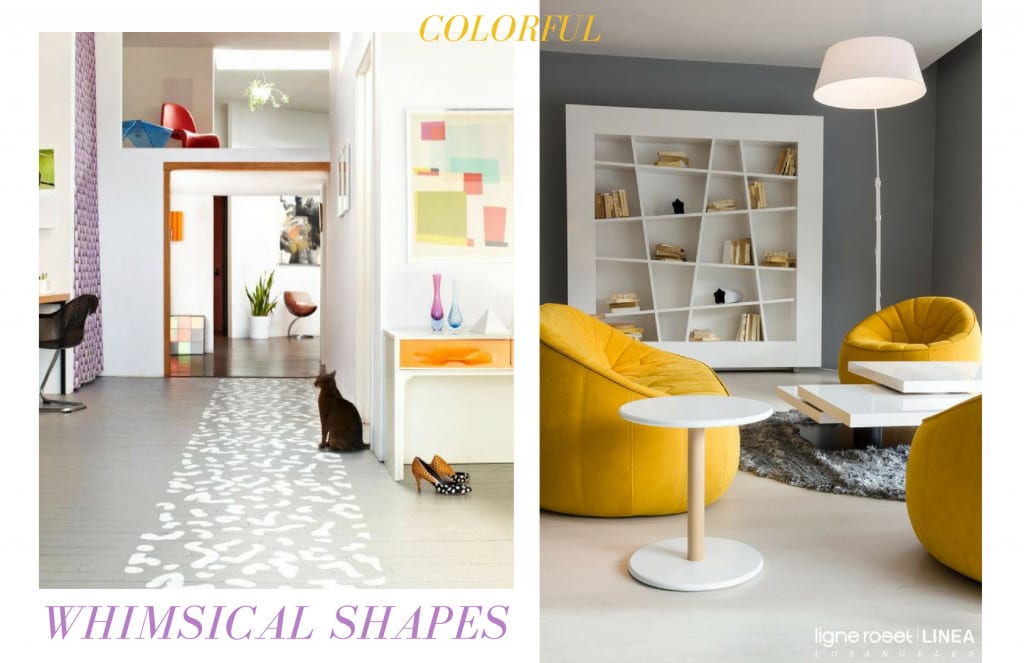 There’s something enlivening about organic shapes and the overlay of the pattern. These stunning wallpapers by Vivienne Westwood are an iconic example of postmodern design, and this playful one is a personal favorite. 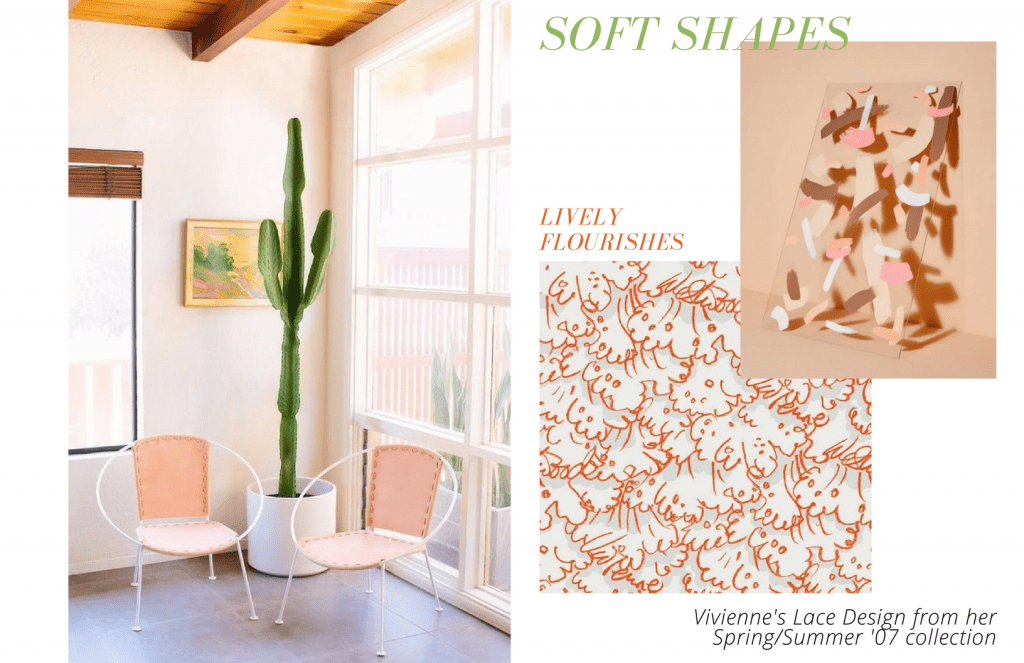 Here, an Arne Jacobsen Egg Chair pairs with odd geometric shapes and an oversized pendant. Creatively assembled, these pieces bring interest and vitality to a room.

On the right, the pastel shades blend with Art Deco lines, a style we’ve seen cropping up in high-end design’s take on postmodern. 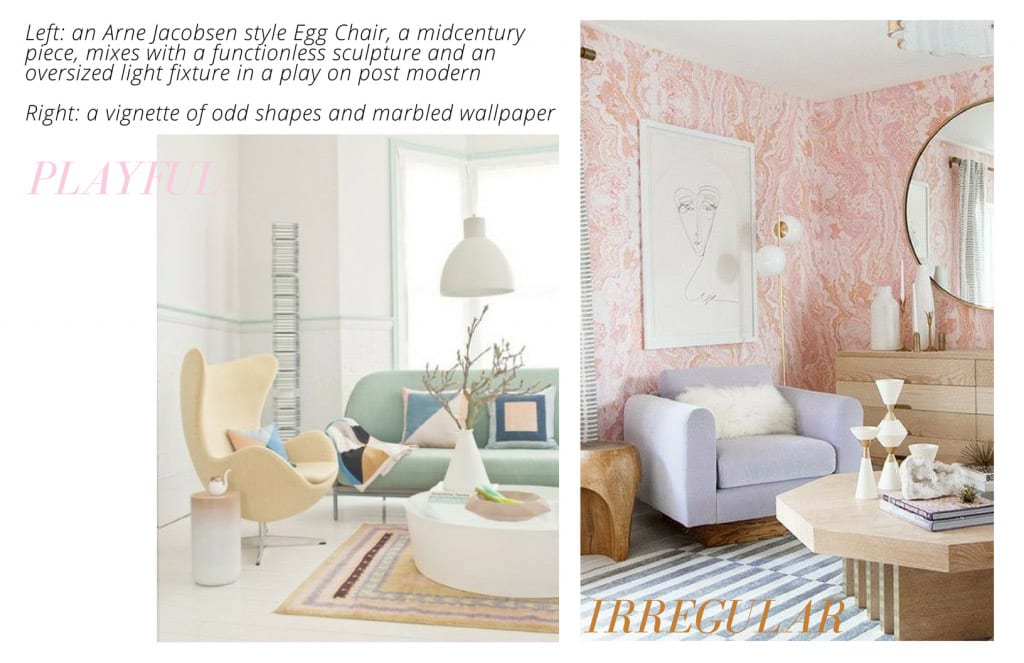 Pastels can give Post Modern furniture a softer look, more relevant to the simple and modern style of many homes in the Northwest, but the original bright hues are dear to our heart. The amount of character in each scene has a certain draw. 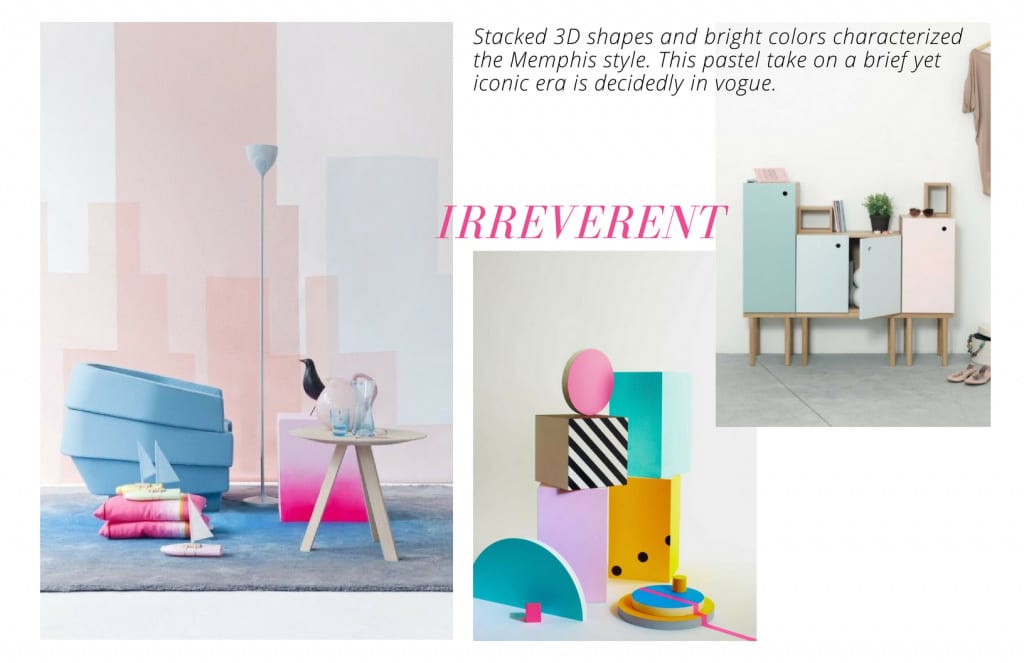 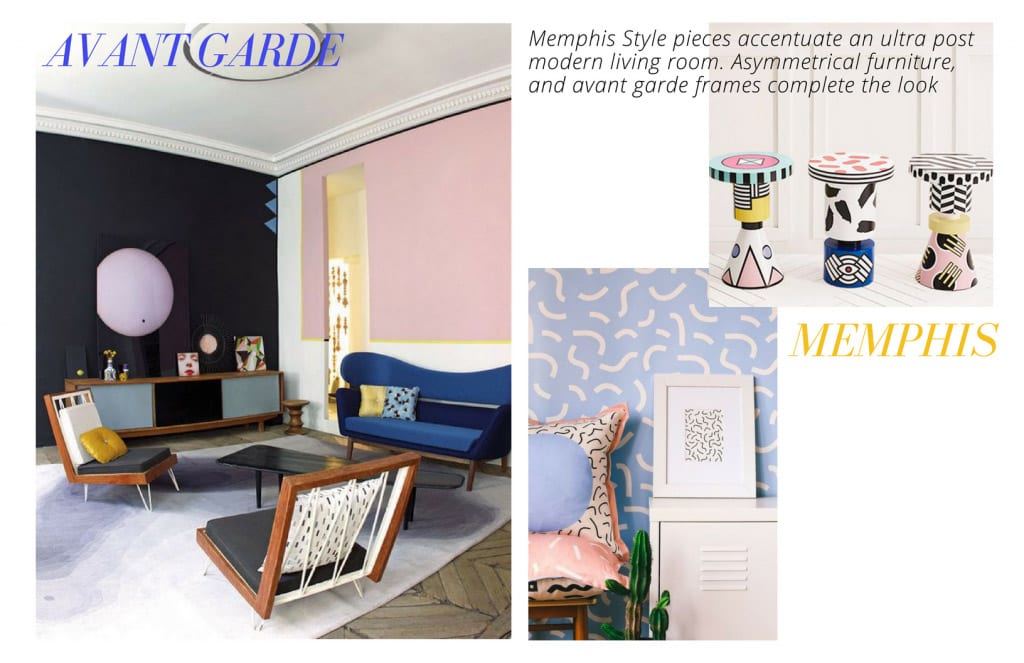 We are natural lovers of all things whimsical and storied. We welcome with open arms the references to the interesting shapes and vivacious colors of Post Modern design. May your home be filled with just as much playfulness and purpose. 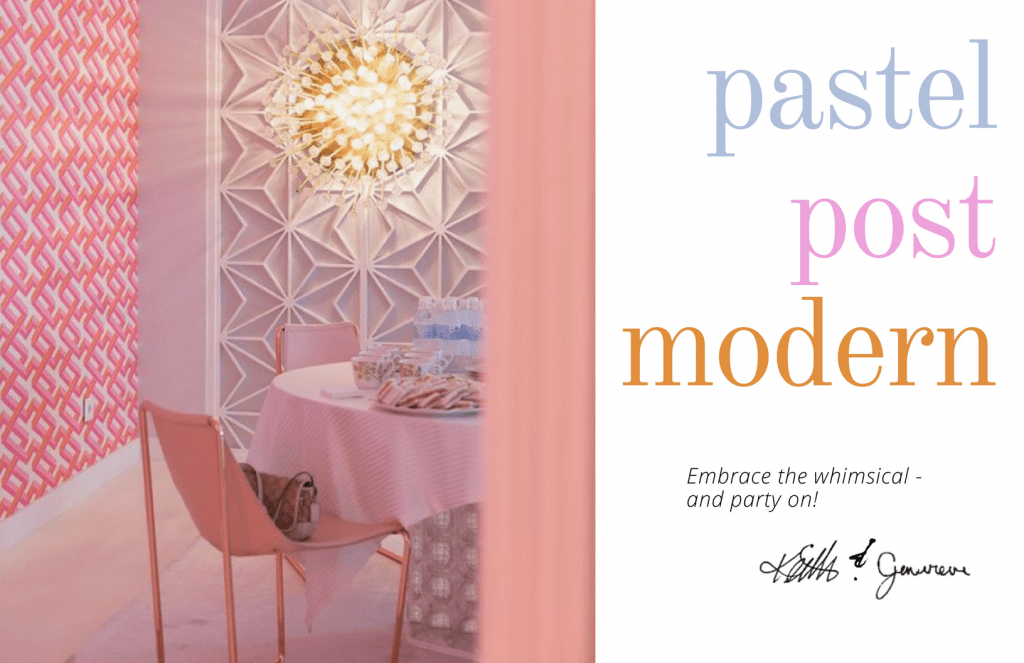 Let's touch base
from time to time:

About Us behind the brand 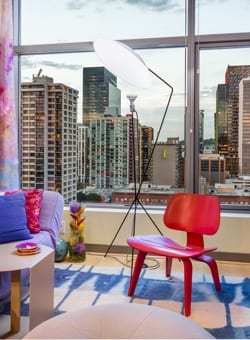 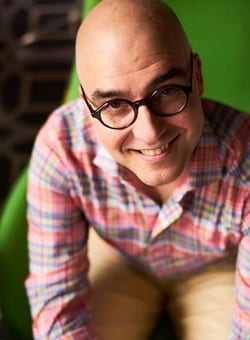 Daring to dream up a design project? let’s make a plan

You’ll quickly gather that the trends and styles we’ve captured in this season’s Form Follows Fashion are rather eccentric… or angry… or surprisingly beautiful…. However you view it, the madness of our current cultural climate seems reflected in these bold and... 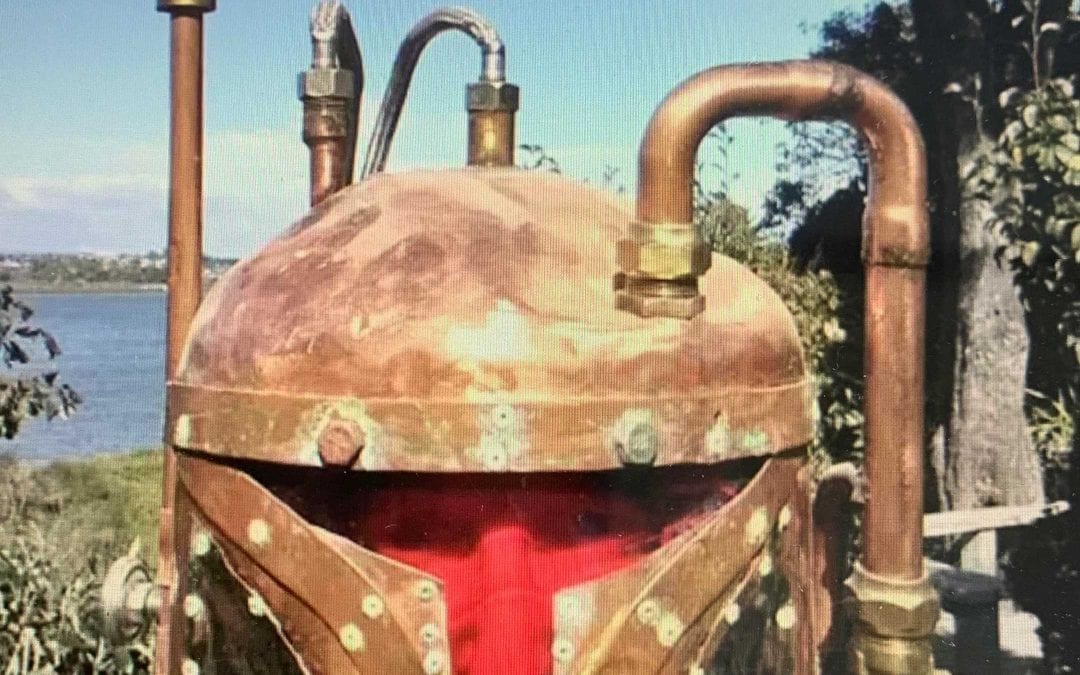 Well, back in January, I had an entirely different anticipation for how 2020 was likely to play out.  What a phenomenal spiral into chaos – wow!  The shock and the shift, all the pivoting and pursuits that we’ve all been managing have left us investing in the... 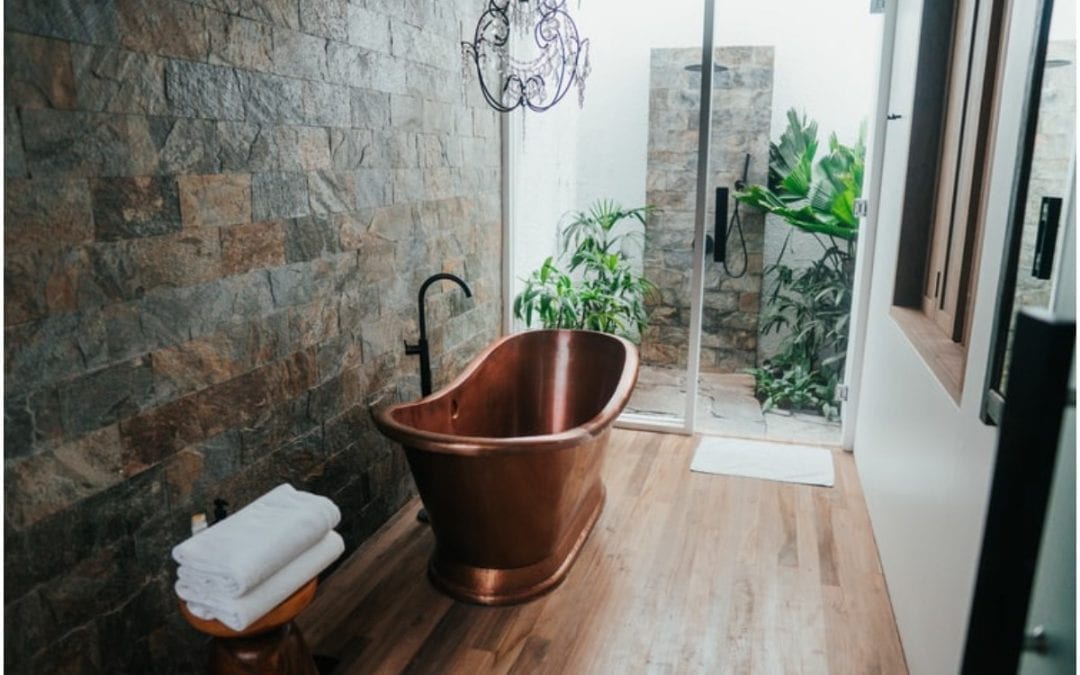 16 Staycation Ideas: How to Create the Ultimate Summer Vacation at Home

Summertime brings warmer weather, longer days, and dreams of vacations to beaches or new cities. But what happens when your vacation gets canceled, you’re budgeting to afford a new house, or travel just isn’t possible because we still need to stay at home? The answer is simple — enjoy a vacation at home. 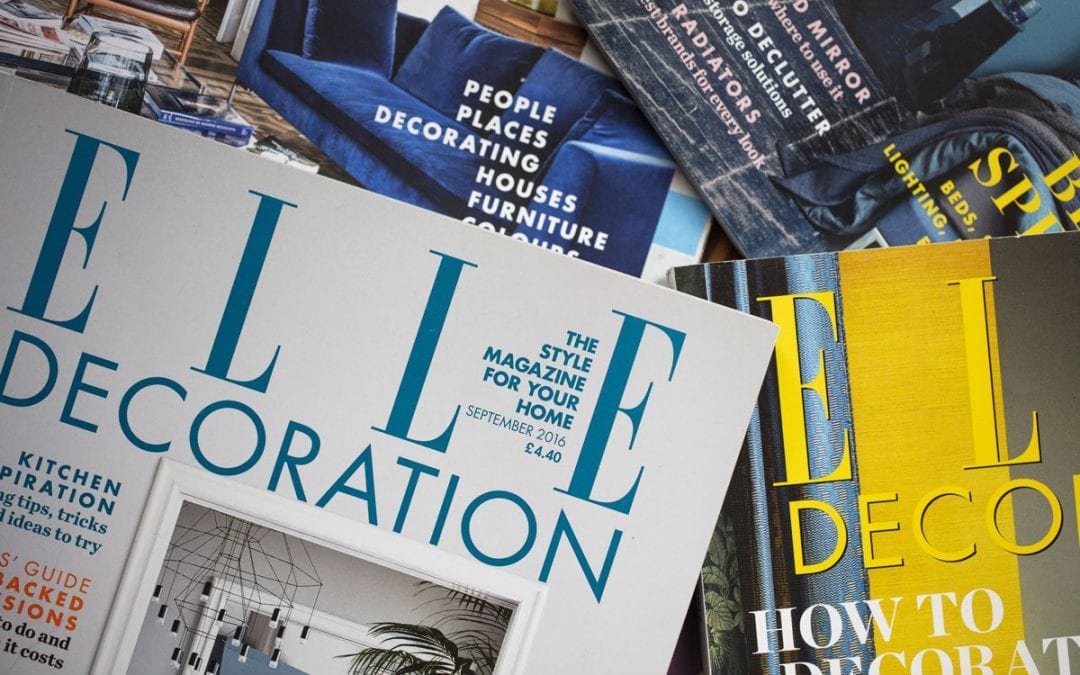 We are pleased to announce that our own Keith Miller will be featured in ELLE Décor Magazine! This comes after Keith received the 2019 Americas Property Award for Best Bathroom Design in Washington, USA.

Authentic personal surroundings that celebrate your unique identity and purpose.

schedule a conversation with Keith Miller

A first client’s favorite color. For over 20 ye

I get a little excited about full spectrum color.